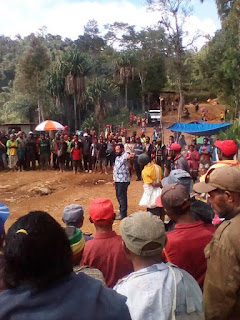 The Coffee Industry Corporation’s Productive Partnerships in Agriculture Project (CIC-PPAP) has created a demand for more growers wanting to join its coffee rehabilitation program.
This was observed during a two week’s tour of the upper highlands by a project team led by manager Potaisa Hombunaka on May 14 - 23, 2018.
In a meeting with growers at Winnikos Village in Kompiam, Enga, on Wednesday 16 May, some villagers were not happy after seeing the distribution of coffee gardening tools and materials to growers.
The growers operate under Lead Partner Peter Yakos of Niugini Sustainable Energy Solutions Ltd who is improving existing coffee gardens in Wabag and Kompiam-Ambun Districts with 1,170 growers.
His Project Coordinator Dick Nembai had to calm down the villagers in a separate meeting after the official presentations.
Earlier Mr Hombunaka explained in his speech that only participating growers will receive tools but trainings associated with the project is for everyone.
“Distribution of tools is locked into the budget for growers who initially signed up.”
“However, everyone in the community is welcome to attend trainings like personal viability, financial literacy, HIV/AIDS, and equal gender participation being facilitated by the partnerships and service providers.”
This received a huge applause from over 500 villages who walked for hours to Winnikos to appreciate this intervention.
The same reaction was observed in an earlier meeting at Monakam Village in Ambum on Tuesday 15 May. Some 428 growers there operate under lead partner Wabag Catholic Archdiocese as Heart Co-operative Society Ltd.
At Monakam the coffee manager called on the provincial government and District Development Authority to support this coffee development initiative to include more growers.
The coffee rehabilitation is a PNG Government (Department of Agriculture and Livestock) initiative supported by World Bank and IFAD (International Fund for Agricultural Development) through loan financing.
At Pangia Station in Southern Highlands, a lead partner Daniel Piopo of Kori Coffee Ltd led the CIC-PPAP team to Maupini, Las Wiru to see many gardens that have been rehabilitated with the tools funded by the project.
“Before the distribution of hand pulpers many growers were using stones to pulp their cherries.”
“But I see that we have created a problem. We have delivered 200 hand pulpers and growers are demanding for more.”
Kori Kofi Ltd is working with 660 growers in Pangia District.
Lead partner Patrick Komba of Wapenamanda Coffee Factory Ltd shared the same in the first meeting on Monday 14 May.
“Rehabilitation has never taken place in this province. Totally zero until this project.”
“People have listened to so many talks. They didn’t believe us in the first place, but they have seen the work and interest have built up.”
“We’re extremely under pressure from growers to join the project. Nevertheless we’re trying to reach everyone.”
Mr Komba is also the chairman of Coffee Industry Corporation Ltd Board of Directors.
In a meeting with coffee mothers at Rambanga Village, Dei Council District, Jiwaka Province on Tuesday 22 May, a female grower extended the call for the project to continue.
“For the first time we seeing some changes in our gardens after the collapse of the plantation management system.”
“We have not settled properly if World Bank, IFAD and PNG Government just leave us like this.”
“We call for an extension for you to settle us properly to sustain ourselves,” added another mother Jenny Michael.
The mothers were engaged by lead partner Jacob Taru of Agro Dev Trade Ltd to deliver the bee keeping component of his coffee rehabilitation program.
The coffee manager in response said the choice is with the responsible government offices including DAL, Department of National Planning & Monitoring, Treasury and the financiers.
“The project will end in June 2019. I do not control the future but we must continue to deliver and let the outcomes speak for us.”
Mr Hombunaka said the CIC-PPAP modality is the new way forward to deliver agriculture projects in the country.
He added: “People are beginning to believe in something after being deceived for years by so many projects”.
The coffee manager further added that the problems of the past was the cause for many challenges faced during the initial stages where some growers were relunctant to take part.
Lead Partner Jacob Taru said: “We cannot blame them. We failed them in the past and many growers are kind of Thomas type. They want to see to believe”.
The project manager visited project sites in Enga, Southern Highlands, Jiwaka and Western Highlands and saw firsthand coffee improvement work carried by lead partners with their co-partners and growers.
The number of households taking part in coffee rehabilitation in 10 coffee growing provinces is 35,000. The project operate under a public-private alliance arrangement with 26 partnerships.
The Coffee Industry Corporation is the custodian of this project which aims to improve the livelihood of smallholder coffee producers, and promote rural development and poverty reduction more broadly.
SHARE THIS
Share it Tweet Share it Share it Pin it