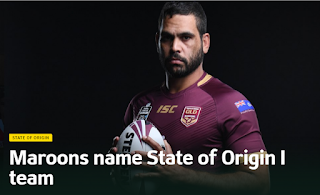 The Queensland Rugby League has named the following line-up to face NSW in the opening game of the 2018 Holden State of Origin series:

Greg Inglis is the new Queensland captain, succeeding Cameron Smith, who announced his retirement from representative football earlier this month after 42 Origins for Queensland and 56 Test matches for Australia.

Inglis has 30 Origin appearances to his name and has scored a record 18 tries.

It's a new-look Queensland team with Smith, Johnathan Thurston and Cooper Cronk all retiring from the representative scene, with Ben Hunt and Cameron Munster the new halves combination and Andrew McCullough starting at hooker.

McCullough and forwards Felise Kaufusi and Jai Arrow will make their Origin debuts in game one.

"I'm really excited for those players and what they can do now. It's their Maroon jumper," coach Kevin Walters said.

Walters described halves Hunt and Munster as "the future of the Maroons".

One young gun to miss selection is Knights fullback Kalyn Ponga, with Michael Morgan preferred in the bench utility role.

"No doubt he's going to play for Queensland one day, just when that is I guess that's in the hands of the football gods," Walters said of Ponga.

"The worst part of my job is ringing those players (like Darius Boyd and Matt Scott) and letting them know they're not in the team," Walters said.

"Scotty's been playing good footy for the Cowboys but we just thought it was the best interests of the team to leave him out.

"Matt Scott for mine needs to play some more football yet. I said to him by no means is he out of the picture and he can play a role in this Origin series.

"He's been playing some good football for the Cowboys but we just felt that it's in the best interests of the team, for game one, to go without him."

"Darius Boyd was disappointed but Valentine, some of the tries he scored in last year's games still stay with me and just at the moment we feel he's the best option for us on the left wing," Walters added.

"I am concerned about the goal kicking but Valentine's kicked, Cameron Munster kicked and Ben Hunt has kicked some goals this year so we'll be right."