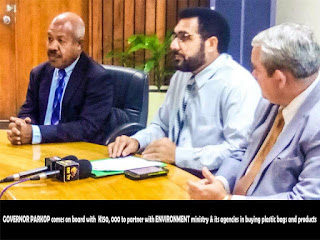 The City Hall has supported the government’s announcement on plastic ban with K150,000 to buy plastic products littered around the city under the cleaner city campaign.

That means a creation of additional employment for residents who wish to earn an income by collecting and selling plastic bags and other related plastic products.

This is apart from those who have already been in the business of selling plastic containers for a living.

At a joint media conference on Thursday inside Parliament in Port Moresby, NCD Governor Powes Parkop, Lands and APEC Minister Justin Tchenchenko fostered a partnership with the Minister for Environment and Conservation John Pundari, and his agencies for the campaign.

In line with the plastic ban, the campaign has been initiated by the Ministry and the agencies to raise awareness on its significance in keeping and protecting the environment clean for residents and future generation.

The campaign further complemented NCDC’s ongoing behavioural change program to promote a cleaner and a safer city for all.

Mr Parkop proposed the World Environment Day on June 5 be sanctioned by the Cabinet as a public holiday for the country to tidy up their environment. Minister Pundari supported the idea and agreed to bring it to the attention of the Cabinet.

Parkop said all those plastic rubbish bought would be stored away in an incinerator.

He said plastic bags and products posed high risks on the food chain as fish and other marine lives which are edible, feed themselves from micro-grains from non-biodegradable plastics.

He said the details on how to use the fund and the price-at which a 50-Kilogram bag of plastics be bought-would made known later.

“The plastic bags will be bought from the residents," he told reporters.

Environment and Conservation Minister John Pundari said the campaign would be in effect until the end of the APEC leaders’ summit, adding it will be reviewed thereafter.

Mr Pundari, a city resident himself, commended governor Parkop for his initiative in keeping the city safe and clean.

Mr Pundari has extended his invitation to other governors and fellow Open MPs in embracing a similar partnership in protecting and beautifying the environment for habitation.

Pundari urged the Governor for Central to jump on the bandwagon as the campaign would need participation from his people living along the Motuan coasts.

He said the government through his ministry has given 18-months grace period to the industry players to come up with alternative solutions in preparation for the total ban.

APEC Minister said he supported the ban as well in the wake of the meeting and beyond.

According to him, the 10-day meeting would bring in over 3000 media personnel from all across the world, further saying they should provide a cleaner, safer and a more beautiful city to portray a good image for the country.
SHARE THIS
Share it Tweet Share it Share it Pin it