PNG borders will be taken care of : PNGDF 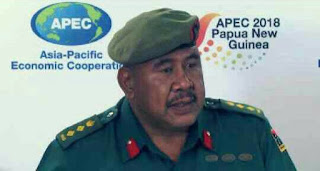 Security preparations continue to an area of interest towards the APEC Summit this November.

Yesterday (April 23) the media had another opportunity to raise more questions on the country’s security capabilities and arrangements.

They were assured that the support PNG is being given by international partners in this capacity continues to strengthen with every confidence PNG’s borders will be well taken care of come November.

Chief of Force Preparation with the PNG Defence Force, Colonel Siale Diro, made the assurance in the media briefing on APEC activities yesterday.

“Security is being given utmost consideration. The core nature of our security preparation lies on the entire length of our border whereas of October 2017, we have increased troop levels,” Colonel Diro said.

Colonel Diro could not reveal the number of military and police personnel stationed at the various border posts, including Kiunga and Vanimo, but did say the entire 2nd Battalion, the 2RPIR was being rotated to man the border.

“Numbers is not an issue; it’s our presence at the border that is important,” he said.

Chief Secretary to government Isaac Lupari told the media that international support from Australia, New Zealand, Indonesia and the United States continue with PNG’s security forces, especially the training of the Incidence Response Group, who are being taken through a number of drills on land, sea and in the air.