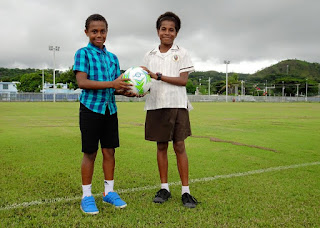 Justus Joseph and Bethany Pakakota, 12 year old football enthusiasts from Papua New Guinea, have been selected as country’s representatives at the global FOOTBALL FOR FRIENDSHIP (F4F) social programme. The F4F programme, supported by Gazprom and FIFA aims at developing youth football and a healthy lifestyle as well as promoting tolerance, open-mindedness and respect of different cultures and nationalities between children from across the globe. Papua New Guinea joins the programme for the first time and will participate alongside 210 other countries and regions.

Justus will join Young footballers from around the world in Moscow in June 2018. The children will be a part of the 32 International Teams of Friendship and play against each other in the Gazprom FOOTBALL FOR FRIENDSHIP International Championship. The friendly tournament aims to bring together children from around the world and celebrate the unifying spirit of football.

Bethany will act as the young journalist and report on all the local and global activities of the F4F programme as part of the International Children's Press Center. She will also spread awareness on the Nine Values (friendship, equality, fairness, health, peace, devotion, victory, traditions and honour) of the F4F programme.

Justus and Bethany will also participate in the Sixth Football for Friendship International Children's Forum in Russia, which will allow youngsters to meet their peers from other countries, share their experiences, and discuss with famous footballers and journalists on how to promote key values of the F4F Programme around the world.

The sixth season of the F4F programme will conclude with a visit by the participating children to the opening ceremony and the first match of the FIFA World Cup 2018.

A sports enthusiast, Justus started playing football at the age of 8. Justus has won several awards such as The Top Goal Scorer, Best Attacking Player and Most Valuable Player in football tournaments across the country. He currently plays for his school team, Koroboro International School Football team, and dreams to play for a professional football club in the future. This talented, young footballer believes it is important to promote friendship, equality and peace because he believes that we need each of these three things to brighten our world.
SHARE THIS
Share it Tweet Share it Share it Pin it