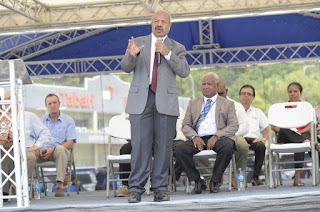 At the launch Governor Parkop said:

“Over the last 10 years we have done a lot to move our city towards a greater city. We have built major infrastructures, we have created a lot of opportunities for young people but we still have a long way to go.”

“With all the infrastructures, what is still eluding us is getting the basics right like making NCD clean, making NCD safe and making NCD healthy.”

“These are the pillars that we need get it right before I fulfil some of the key priorities I have set for the next five years to address. As part of getting the basic right we are starting in Boroko to keep it clean, healthy and safe. Only if we get these basics right can we arrive at having a greater city. “

“The future that is awaiting us is a city that free of crime and violence. A city that is clean and smart. Then we will move to upgrade settlements to suburbs and also modernise the Motu Koitabu Villages.”

“Besides getting these basics right, we also want to get rid of undesirable elements such as filth and rubbish, including that caused by buai spit.”

“We are also targeting crime and illegal vending in these areas.”

“We want to build a healthier, cleaner and happier society. Boroko is only the beginning.”

“We have already commenced operations in Boroko and I am very impressed with the results. The city is changing and it can only get better” said Governor Parkop.

“That’s why we are voted to office as leaders and work in office as staff of the Municipal Government.”

“I want to share again my impatience for change. 42 years is too long. No more excuses. For the last ten years I have blamed our people. In the coming five years I want to take responsibility and make sure we come up with solutions. We should be experts by now. This initiative is about us taking leadership and responsibility,” he added.

The Corps have been engaged by NCDC to work with local police in the clean-up campaign.

Last week, Boroko residents, shop-owners and visitors were happy to hear that The Corps apprehended two suspects who snatched a member of the public’s handbag.

The suspect was handed to NCDC police.

“The NCD Police unit have been fantastic. They have been out on patrol and city residents are happy to see their presence on the street,” he said.

“Besides assisting the police, The Corps encourages people to throw rubbish in the bins and use them to avoid fines for littering,” Cross said.

The official launch of Yumi Klinim Mosbi was held today at Tabari Place.

The campaign will soon roll out to other suburbs and locations in Port Moresby.