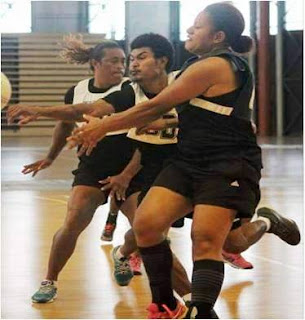 The Trans Pacific Cup between PNG and Australia is scheduled for the 27th of August 2018, and the PNGMMNA is opening up trials to athletes from PNG and overseas who believe they have the ability to represent this great country at the highest level possible for the sport.
President Adam Parker stated, “We are expecting a lot of people trialing for the Squad and are looking to select 45 to train until July where the final teams will be announced for the Trans Pacific Cup.”
“A high well developed level of skills is expected from the females that come to trial as this is International Level Netball, however with the Men we have to be more realistic and although having the developed Netball Skill is certainly beneficial and an advantage, we are also looking at male athletes who have the ability to listen, take direction, adjust and implement quickly.”
"We have had great success taking Basketball and Volleyball players and transferring that skill to Netball and know that PNG athletes have the ability to transfer their athleticism to any sport and adapt and learn quickly. "We are also looking at those athletes that have a bit of height as well as the ability to get off the ground as we are certain the Australians will send a very tall team to PNG.”
Parker said, “Our Coaching Team has a lot of Netball Knowledge and skill and will be assisted by 3 expatriates who will use their experience and knowledge of playing Mixed and Men’s Netball at an elite level in and for Australia. Their first hand knowledge and experience will be vital as this is the Maleo’s International Debut and will be the first time that the majority of our player will experience this level of Netball.”
Parker added, “We are under no illusions that PNG infancy in the sport compared to the Australians will be a challenge, but with the determination of the coaching team, driving the players development we are quietly confident that the players selected for the two teams will not go down without a fight, we believe with what we have already seen, the Maleo’s will surprise everyone in just how good they are and provide PNG a Test Series that is skilled, fast, competitive and exciting to watch to all those who come down to support the Maleo’s.
The Trials are scheduled to start Saturday 28th of April at Sir John Guise Indoor Stadium and conclude Sunday 29th of April at Rita Flynn Indoor Courts. Those wishing to trial must make themselves available over the 2 days. Player Registration will only be done between 8am and 8.45am on Saturday 28th. Pre- Registration is advised and the registration form can be obtained by emailing pngmmna@gmail.com .
Like the PNG Mixed and Men’s Netball Association Facebook page to be kept up to date on all the latest on the Trans Pacific Cup.
SHARE THIS
Share it Tweet Share it Share it Pin it