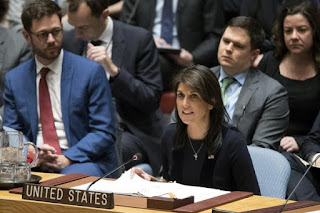 UNITED NATIONS: The United States said on Wednesday that Russia was “responsible” for a nerve agent attack on a former Russian spy in England, and urged the UN Security Council to hold Moscow accountable.

“The United States believes that Russia is responsible for the attack on two people in the United Kingdom, using a military-grade nerve agent,” US Ambassador Nikki Haley told an emergency council meeting.

The March 4 attack in the English city of Salisbury left ex-spy Sergei Skripal and his daughter in critical condition.

US President Donald Trump had pressed Russia to provide answers but did not suggest that Moscow had a hand in the attempted murder.

As one of the council’s five permanent members, Russia is entrusted by the United Nations with upholding international peace and security, Haley said.

“If we don’t take immediate, concrete measures to address this now, Salisbury will not be the last place we see chemical weapons use.”

Britain called the emergency meeting to rally support in its standoff with Russia over the attack that British Deputy Ambassador Jonathan Allen said was “state-sponsored.”

“We ask you today to stand by us,” Allen told the council.

“This was a reckless and indiscriminate act that put at risk the lives of civilians.”

Moscow has denied any involvement in the attack using the nerve agent Novichok, which was developed by the Soviet Union and later inherited by Russia.

UN Secretary-General Antonio Guterres earlier said the use of a nerve agent was “unacceptable” and called for a thorough investigation.