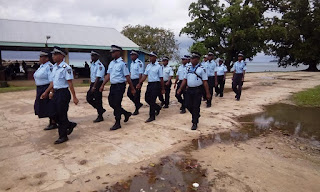 Supervising Provincial Police Commander (PPC), Inspector Hugo Maelasi says, “The march is part of the police high visibility as well maintaining the physical fitness of Police officers in the province. Police at Tulagi also want to maintain RSIPF code of discipline and have confidence to address any public disorder within the CIP.”

“I appeal to good community members and chiefs with church leaders in the province to support the work of the police to carry out its policing work within the province,” says PPC Maelasi.