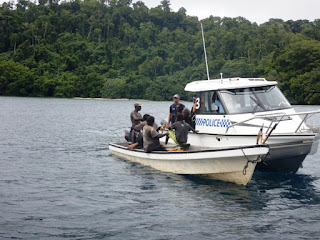 Police in the Western Province welcomes and applauds the border peace dialogue between the chiefs and other community leaders from islands in the Western border region of Solomon Islands and Bougainville on the Papua New Guinea (PNG) side of the common border.

The border peace dialogue resumed last November and is expected to continue this year. It is coordinated by the Director of Peace and Reconciliation in Western Province.

Provincial Police Commander (PPC), Western Province, Chief Superintendent Mathias Lenialu says, “The border peace process is a positive way forward to mitigate current border issues including fishing within both sides of the Solomon Islands – PNG common border area, the movement of people across the common border, unregulated trading of goods, commercial activities, threats and risk on Agricultural plants, and resolving of disputes with our neighbors along the common border area.”

The last meeting of the dialogue was held from 27 to 29 November 2017 and was attended by chiefs and traditional leaders from the Shortland Islands, Choiseul, Western Gizo Region, Central Gizo, and representatives of the Ministry of National Peace and Reconciliation, Ministry of Police, National Security & Correctional Services and Ministry of Foreign Affairs. The next meeting of the Border Peace Dialogue is scheduled for later this year.

PPC Lenialu says, “The border peace dialogue is a positive way forward to assist Royal Solomon Islands Police Force (RSIPF) and other law enforcement agencies on both sides of the common border in addressing various issues that arise within each jurisdiction. This includes general policing along the common border by police in Western and Choiseul Provinces as well as cooperation by chiefs and traditional leaders.”

“Police in Western and Choiseul provinces look forward to the outcome of the border peace dialogue and will work together with chiefs and traditional leaders to implement whatever actions are agreed on. I call on all citizens of Solomon Islands at the common border region to respect our neighbours and maintain peace in the region,” says Chief Superintendent, Lenialu.
SHARE THIS
Share it Tweet Share it Share it Pin it