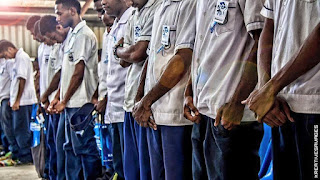 The school Board of the Kilakila Secondary School in NCD has suspended six grade 10 students following a school fight last week between grade 9 and grade 10 boys.
Deputy Principal Administration, Mr Philemon Geidilo said this sort of fight usually happens at the beginning of every academic year and it is the same for this year when the grade 10 boys bullied the new grade 9s which started the fight.
As a result, relatives of a grade 9 student went on a rampage on the school ground and damaged a classroom that led to a near confrontation between those relatives and the entire student body.
Mr Geidilo said the school identified six students who were the main instigators behind the fight and they were served suspension letters on Tuesday by the Discipline Committee.
The students will return on the 28th of this month for the Board to decide on the termination.
“The principal and the school administration wanted to immediately terminate them but we were instructed by the Board to follow formal procedures in termination and that is for the students to be heard prior to their termination”
He said this fight is a repetition of previous years which is exhausting for teachers and the school is now at the point of making some very critical decision which may not go down well with authorities.
Options like accepting girls only into grade 9 by next year are some critical decisions the school is looking at if this stubbornness among the male students continue.
“This ongoing fight has become like a tradition among students and it has gotten worse in the last three years which has promoted the Board to come up with the Zero Tolerance policy on school fights in 2016”
Since the introduction of the Zero Tolerance policy on school fights, Kilakila Secondary has been giving out open transfers and expulsion to students who were involved in any fight within the school or with other schools.
The school administration will meet again with the school Board and they hope to convince the Board to come up with tougher penalties.
SHARE THIS
Share it Tweet Share it Share it Pin it