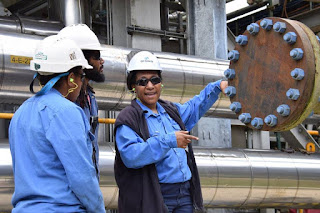 “Set your focus on the end goal"

Oil Search has an excellent track record of mitigating production decline through infield and near field drilling, field rejuvenation, incremental workovers and optimised reservoir and facilities management. Achieving this in a low oil price world and while operating in one of the world’s most challenging environment means pulling together the best team of subsurface engineers and geoscientists available to support highly skilled field production, maintenance and world class drilling teams. This diverse team of engineers and geoscientists have been the architects behind Oil Search’s PNG oil and gas production and working amongst them is Serah Wakia Joseph.

From the Enga Province, Serah remembers growing up in the 90s watching her uncle who worked for Oil Search, fly back and forth from work.

“I remember as a child looking at Oil Search’s Annual Reports with its images of the Central Processing Facility (CPF) and imagining how amazing it must be to fly back and forth from work in such a place. And who would have thought that 20 years down the line I’d have the opportunity to work in that very facility as a Petroleum Engineer,” says Serah who has now gone on to become Production Engineer for Oil Search’s corporate office in Sydney.

“Earlier on I was intrigued by how an aircraft managed to stay airborne. I was later challenged and motivated by the fact that there were not many women in Engineering at that time. I wanted to make my mark in this male dominated space so I chose to take up science.

“Broadly my current role is to provide Production Surveillance and Operational Support particularly to the CPF,” says Serah who was involved in the execution of Oil Search’s ongoing flare minimisation strategy at the CPF in 2012.

“We were transitioning towards gas export phase at that time and it was a shift in the way we operated. It took a while to get everyone engrained in the concept of conserving the gas for future gas export which would provide more value for us. CPF now flares well under 1 Million standard cubic feet per day (MMscfd) and I’m proud to have been part of the team.”

Serah has been with Oil Search for six years and has accomplished a few other milestones in that short period.

“I am thankful to Oil Search for such wonderful opportunities and as one of the very few Papua New Guinean women to take up petroleum engineering, I am humbled and honoured to serve my country and Oil Search in this capacity,” said Serah.

“I also chose Oil Search because of its approach to sustainable development. This is evident in its commitment towards Health, Education, Literacy and Women’s Protection and Empowerment through the work of the Oil Search Foundation and it also has an effective Environmental Management System that is
compliant to ISO 14001. I am therefore proud to be part of a Company that makes a difference in the lives of ordinary Papua New Guineans.”

And Serah’s advice to aspiring scientists and especially women: “With more women now recognised in the Science, Technology, Engineering and Mathematics (STEM) fields, there could not be a better time to pursue a career in science. Like anything in life what you get out is what you put in. So my advice would be if it’s something that you really want to do, set your focus on the end goal and just go for it.”
SHARE THIS
Share it Tweet Share it Share it Pin it