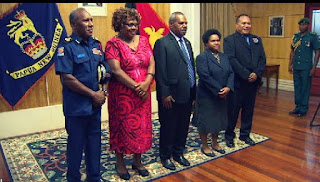 Three senior Government officers have officially signed their contracts despite taking up office in 2015 and 2016 respectively.

Despite not signing their contracts when they took up the jobs two to three years ago, they have been proudly serving the country in their respective capacities.

For Police Commissioner Gari Baki, he was called back to the office by the National Executive Council in 2015 for a term of 4 years.

“We’ve come out with so many challenges,” said Baki.

“2015 was a year of a lot of instability. Internal issues challenging the police force, we’ve come out of it.

“We’ve taken the country to the elections in 2017, we’ve come out of it and now we’re going into APEC.

“For me as the Commissioner, the challenge is to deliver APEC for the people of Papua New Guinea with the support of all men and women of the Constabulary to deliver APEC safely and successfully.”

Deputy Chief Censor Abani has served the country as a public servant for over 20 years and is happy to serve for a few more years.

This is his second term in the Office of the Deputy Chief Censor. He was reappointed in 2016.

“What we do in our office is a mammoth task. Our primary role is to classify films and publications, either produced locally or internationally.

“This year we’re ready to conduct awareness throughout the country, especially to our young generation, about the importance of technology.”

Second Legislative Council Akop is the first female to be appointed to this job in 2016.

This mother of 8 juggles family life and a challenging career very well.

“I am very proud to be a public servant to serve the people of Papua New Guinea,” she said.

“I’m very happy that my role now is in a higher level, and it is a level of responsibility as well and I have a lot of challenge to ensure that I am drafting good laws and translating policies well into laws for good governance.”
SHARE THIS
Share it Tweet Share it Share it Pin it