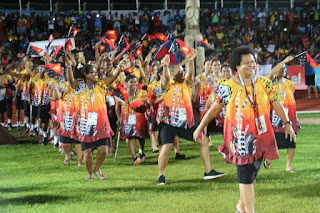 A number of PNG athletes were in action last weekend at the Australian National Championships which were held at the brand new Carrara stadium where the Commonwealth Games will be held in two months time.
Mowen Boino started his build up to the Games where he left off in Vanuatu in December, clocking an excellent 52.61 seconds to reach the final of the 400m hurdles where he finished fifth in 52.07 secs which is his best time since June 2016. Adrine Monagi was also in fine form, running an impressive personal best 13.89 secs for the 100m hurdles and narrowly missing out on a place in the final. Debono Paraka who recently improved his national record in the discus throw to 51.00m also finished in ninth place with a throw of 48.67m. Nazmie Lee Marai ran 10.96 secs in his second 100m race since the Pacific Games but this was not enough to progress to the semi final. Peniel Richard couldn’t find his rhythm in the horizontal jumps and with only three attempts allowed he did not register a mark in the triple jump and was well below his best in the long jump. Theo Piniau made it through to the semi final in the 200m where he clocked a time of 22.16 secs.
Meanwhile over in the USA Afure Adah is in great form and clocked a superb 56.57 seconds for the 400m indoors. Wesley Logorava is also coming into good form and clocked indoor personal bests for the 60m (6.92 secs) and 200m (22.26sec). Robson Yinambe also had a busy day in Highland Kansas completing all seven events in the heptathlon in one day, His points today of 4424 was a big improvement on what he did at the same Meet last year.
SHARE THIS
Share it Tweet Share it Share it Pin it