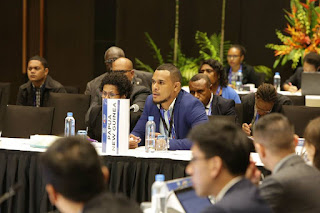 Papua New Guinea has officially kicked off its APEC year with the first of its 78 meetings underway up until March 9. The First Senior Officials Meeting (SOM1) got underway on a high note at Port Moresby’s Stanley, Laguna, Lamana and Gateway Hotels over the weekend. Officials from the 21 APEC economies are now in serious discussions with an initial 12 meetings.

About 2000 officials from the 21 APEC economies will be in Port Moresby for this SOM 1 and will be jetting off to Goroka for their regional visit to experience PNG.

“Our APEC will be a truly Pacific APEC, with delegates leaving our country with a better understanding of Papua New Guinea,” he said.

Mr Hawkins said: “APEC has finally arrived and it’s been six years of planning – 2013 to 2018 with all resources now being pulled through for the major meeting.

“SOM 1 is the first big meeting that we are hosting to kick start the APEC Year. It’s good to finally host it, as it’s been a long road since 2013 when Prime Minister and APEC announced that PNG will host APEC in 2018. Now the year has certainly begun and we are expecting for this event over 15,000 delegates. It will be more when we factor in all our agency delegates from various PNG agencies and work force of over 1000 of all sectors from security to transport, hotels and all who will be here to ensure that the series of meetings are a great success.”

Chief Secretary Lupari said APEC has now landed in our country, it has landed and we are now starting the APEC year.

“The officials who will be engaged in providing technical support- for about 70 meetings will be chaired by Papua New Guineans.

Ambassador Pomaleu said the policy engagements have begun and we have a total of 78 meetings to run from the 24th of February right up to the 9th of March. “About 23 of those will be chaired, co-chaired or vice chaired by members of our PNG officials team who later will be introduced.

“We have 23 of our officials who will be chairing those meetings and that’s an important milestone for our country, it has never been done before. So apart from these chairing, we now have as part of our hosting privileges 23 of our officials to chair and lead discussions with the working committee and something we are obviously proud of.” There will be two more Senior Officials Meeting during the course of the year with the final concluding SOM 4 leading up to the main APEC Leader’s Week and Summit in November.