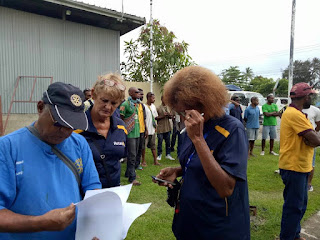 Modilon Hospital in Madang is one of only a handful of regional hospitals in the nation and serves a population of more than 500,000 people. Last year the hospital was forced to scale back operations due to cuts to the country’s national budget and supplies have become dangerously low. Pathology and Radiology services had to be limited and the operating theater could only be used for emergency patients.

Two weeks ago, a forty-foot medical container with more than US$400,000 in medical supplies was delivered to Modilon Hospital. This was a joint effort between Montrose Based PNG Tribal Foundation and Montrose Rotary Club who were also joined by Telluride Rotary Club, Carbondale Rotary Club and Rotary International.

Dr. Atua thanked the PNG Tribal Foundation, Project CURE, and the various Rotary Clubs involved for the much-needed supplies. He said, “This assistance is very timely, especially in the harsh economic climate the country is in.”