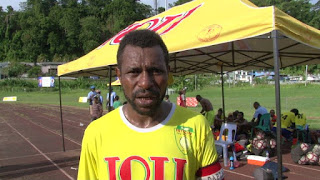 Toti City FC has registered their second consecutive win in the 2018 National Soccer League campaign with an 8-1 win over Buang FC in Lae today(Saturday).

In a one sided affair at the Sir Ignatius Kilage stadium, Toti led convincingly 5-Nil into half-time and later scored another three goals in the second half.

City FC will host Madang FC in the third game next Saturday in Lae.