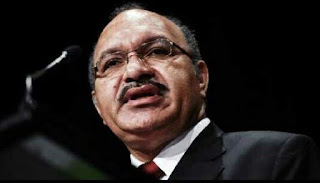 The Prime Minister, Peter O’Neill has announced an immediate commitment to assist the people of Kadovar Island in the East Sepik Province that have been recently affected by a volcanic eruption.

PM O’Neill also commended the Governor of the East Sepik Province, Hon. Alan Bird MP, for taking the steps to arrange for the people of Kadovar to be evacuated to safety at nearby Ruprup Island, and to the mainland of Wewak.

The Prime Minister said the safety of people in the area around the volcano, and areas where there could be potential risk of tsunami, is of paramount importance.

“The welfare of people in the area around the volcano is of immediate concern,” the Prime Minister said“With volcanic or seismic activity, there is always the further risk of tsunami.

“I call on all people in coastal areas in the north of the country to be on alert.

“It is almost twenty years ago that we saw the devastating effect of the tsunami that hit Aitape and nearby areas.

“We can never drop our guard, and always look for the signs of a potential tsunami. Then if the warning signs appear, get yourself and your family to safety.”

In making this commitment, Prime Minister O’Neill also directed Acting Secretary of the Department of Prime Minister & NEC, Mr Frank Aisi, to ensure provision of fresh water and food supplies for the people of Kadovar Island were procured and sent to the temporary relief centre at nearby Ruprup Island.

Prime Minister O’Neill also directed for the Department of Prime Minister & NEC to work closely with the Office of National Disaster and Emergency Services and the PNG Defence Force and other relevant Departments and Agencies to continue to monitor the situation and ensure supplies reached the people affected in a timely manner.
SHARE THIS
Share it Tweet Share it Share it Pin it