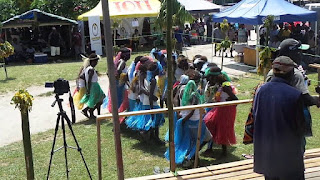 Bougainville is transiting a critical period because of the issue of Referendum which will be held in June 15 2019.
This was according to the Member for Tonsu, Ezekiel Masat during the seminar hosted by the Umi Wan Festival of Arts and Music held at the Bel Isi Park today.
In acknowledging the concept developed by the Umi Wan Festival which triggers Bougainville’s Unification, the Member said that the Festival has created an avenue for people to be aware of issues around them.
He said that given this period, the people can be able to learn and understand the Referendum Issues thus preparing themselves for the Referendum Election to be held next year.
Mr Masat said that it will be very unfair if the people are not fully informed of the issues of Referendum.
He said having minimum knowledge of the Referendum, it will be of no use when trying to impart other additional aspects of Referendum to the people.
The member is firm that the people must be fully informed and prepared before they make the decision for Bougainville’s political future.
In light of the Referendum Ready Concept, the Member mentioned that the Bougainville House of Representatives has passed a resolution in 2016 for each constituency to be responsible for the Referendum readiness.
According to the Member, So far, only two Constituencies which are, Bolave Constituency in Bana District and Hagogohe Constituency in Buka District have declared a referendum ready constituency.
The Member said that all Constituencies should adhere to the three requirements earmarked for a Referendum Ready Constituency. This includes weapons disposal, economic development and internationally accepted standard of good governance.