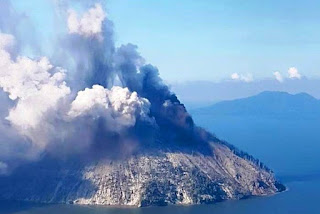 Currently the East Sepik Provincial Government under the leadership of the Governor Allan Bird, the Administration particularly the Provincial Administrator and the Provincial Disaster Coordinator as well as the Wewak District Development Authority have cooperated very well in resettling the affected people of Kadovar Island on the main land with constant supplies of food, water and medical supplies and other necessary arrangements.

So far, the donations are still flowing in but the authorities haven’t done a stock take to know what exactly in cash or kind has been received. Some notable donations so far have come from the Governor of NCD PowesParkop as well as from the New Ireland Provincial Government.
The authorities on ground are also liaising with other Provincial Disaster Coordinators for whatever has been passed on them for the Kadovar Relief Effort. However,the need for more rations like food supplies and water is needed daily and very soon the responsibility of coordinating the Relief Effort will be passed on the Wewak District Development Authority to take charge of.
As for the people of Biem and Ruprup Islands the need of immediate evacuation is not imminent based on reports from the Rabaul Volcano Observatory which states that, the volcanoes on these two island will not be erupting. PNGFM
SHARE THIS
Share it Tweet Share it Share it Pin it