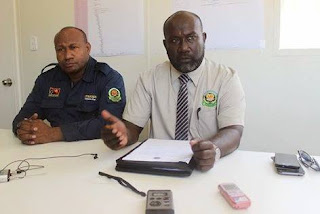 PNG Customs have reported an increase in illicit trade in the past 6 months.

Chief Customs Commissioner, Ray Paul said this in a press conference over the weekend before the destruction of illegally imported cigarettes near its container examination facility at Motukea.

The Customs boss says despite having the state-of-the-art container examination facility, the illicit trade continues to be a big challenge for his enforcement unit.

"The number of illicit trade continues to rise in the last six months and you know we know for sure that it has been happening overtime.

"But we are thankful for the tool that we've employed this container examination facility which has worked well for us.

"Unfortunately the illicit trade continues every now and then.

"Our challenge is to have that control.

We know its not easy, its hard but we are doing all we can".

Ray Paul also issued a stern warning to business houses who are illegally importing goods into the country.

The Customs boss says the law will eventually catch up with those involved in smuggling products illegally into the country.

Mr Paul issued the warning before the destruction of millions of Kina worth of cheap asian cigarettes near its container examination facility at Motu Kea.