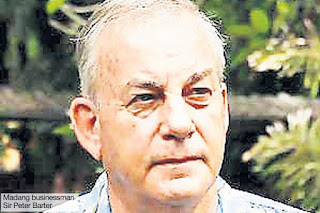 COMMERCIAL activities declined in Madang last year because of cost-cutting in the private sector, Madang businessman Sir Peter Barter, pictured, says.
“Over the past 12 months some businesses have ceased to operate due to the downturn in the economy,” Sir Peter said.
“Fewer people are travelling, fewer conferences are being held outside Port Moresby and fewer businesses are holding meetings or travelling – as a result of the economy.
“This is an important issue as it is the private sector that drives the economy. It also effects revenue in as much that businesses are not paying as much tax, therefore reducing government’s ability to improve infrastructure, health, education, let alone improve the quality of life in rural areas.
“The people have expressed their concerns over the number of Asians operating and serving in supermarkets, unfairly competing against genuine investors who pay their tax and rates.
“There is a concern by residents in Madang that rates are not being paid by many people and businesses.
“It is these types of concerns that have a direct impact in attracting genuine investors, not only to Madang, but PNG too.”
Sir Peter pointed to the collapse of Banab Bridge on Thursday last week as an example of how commerce was affected by the transport system.
“The roads are a major concern as there needs to be an exerted effort to re-route the highway to Lae through the Transgogol and Ramu Valley to complete the road to Mt Hagen and immediately repair the Banab Bridge,” he said.
“The people cannot wait six months for a temporary bridge.
“In Madang, there is no longer a third-level airline serving rural airstrips.
“This also makes it difficult for the government to deliver services to the people”. The National / One PNG
SHARE THIS
Share it Tweet Share it Share it Pin it