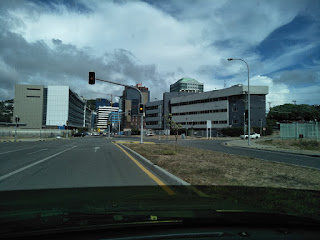 A Catholic priest in Port Moresby was held up and had his car stolen last Wednesday by three armed men.

According to the Catholic Bishops Conference secretary-general Fr Victor Roche in The Catholic Reporter, Issue 145, the incident happened at 8.30am after he had visited one of his parishioner’s and returned to his car.

“There were three men, two with guns and one with a stone.

“As they held guns pointing at his head asking for the key of the car, he shouted for help. No one came to help. They were afraid or they did not want to be involved. As he kept shouting for help, one hit him on his head repeatedly. So he gave the car key and they drove away with the vehicle. He was eventually able to call a friend, who took him to the hospital. Thank God nothing serious happened to him.”

Fr Roche said also that a few years ago he was also attacked by “rascals” while returning from Gerehu. This also involved a gun.

“When I went to report it to the police station in Gerehu, the police told me, ‘We are unable to do anything because the rascals have guns and we do not have guns’.

“It is not an answer one likes to hear from the police, as they are supposed to protect the people.”

Fr Roche said there were similar crimes taking place in the urban areas of PNG.

“Some are smaller and some are serious crimes involving injuries or death,” he said.

He said the Catholic Church was concerned about the law and order situation, which was getting worse day by day.

“We are giving bad news about PNG to the tourism industry and the people overseas.

“I call on the police force and the government to check on the production and use of drugs and homebrew. Most of our rascals commit criminal activities after taking drugs or homebrew. Police also should check on the use of guns,” Fr Roche wrote.

He called on the government and the people to reflect on why are our young people are involved in such thefts and crimes.

“I call on parents to teach the children good discipline. Children should be taught good values at home!

“We can have a better and safe PNG.” Post Courier/PNGFacts