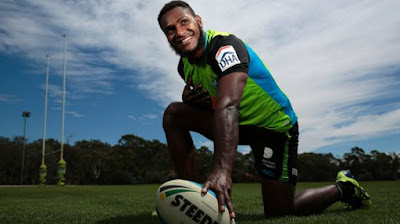 The Canberra Raiders will look to set up a Kato Ottio scholarship as a lasting legacy to help further the careers of promising Papua New Guinea footballers.

Raiders boss Don Furner said the NRL club had set up a gofundme page where fans and members could donate to a memorial fund in honour of their former player.

Ottio collapsed while training with the PNG Hunters in Papua New Guinea three weeks ago and later died in hospital.

Furner said the club would hold a tribute to Ottio at their first home match of the NRL season - against the Newcastle Knights at Canberra Stadium on March 18 - which would also double as a fundraiser.

Some of the money raised would go to Ottio's family back in PNG - it had  been the Kumuls winger's dream to buy his mother a house.

Originally, the Green Machine threw their support behind the Widnes Vikings' campaign - the English Super League club where he'd signed for 2018 - but wanted to do something to help as well.

Part of that could be a lasting legacy for PNG footballers.

His brother Ahulo jnr revealed at the funeral that Ottio's love for PNG was such that he turned his back on a contract with St George Illawarra to play at the World Cup.

"There's a few ideas that were floated around, apart from just raising some money and helping the family out, maybe there's a long-term legacy there where we look at a PNG player every year and offer some kind of scholarship," Furner said.

"So there are other ways that we do it.

"We haven't spoken to his family yet, but they were some thoughts that went around to make sure it's not just a one-off thing, but there's something lasting from this tragedy and remembering him.

"There is a lot of talent there [in PNG] and he was one out of the box that came late to rugby league and showed how much talent he had.

"It would be a good thing both ways - it would be a nice way to remember Kato and help us look at a new market and give kids an opportunity to play in the NRL."

Furner said Sia Soliola and the senior players had come to the club wanting to do something for Ottio's family.

They would continue to work together to finalise plans as the season approaches.

"The players spoke to us about getting together something and we had a lot of feedback from our supporters asking if we were going to set up something similar to what Widnes had," Furner said.

"We had to work out how we were going to do this, make sure it's done properly and not just a one-off thing and forgotten."

Members of the Canberra PNG cultural society approached the Raiders at the time of Ottio's death and they'll be involved in organising a tribute to Ottio at the Raiders' round-two game.

The Green machine were also considering a memorial jersey, which they could seek NRL approval to wear at a game during the 2018 season.

It was also likely the Raiders players would wear black armbands in Ottio's memory.

"We did pinpoint that first home game as the major fundraiser. It starts online and we'll do a tribute to him at that game," Furner said.

"We have talked about a Mounties-Raiders jersey, or a PNG jersey. We've got to go through that with the NRL yet, but whether we just do that as a fundraiser or do that and apply to wear it and auction it off, and that also goes to the fundraising aspect.

"We're just going through that at the moment."