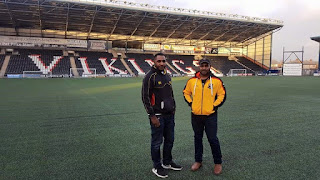 The Albert brothers have arrived  in the United Kingdom and settled in  their new homes in Widnes.  Both brothers will play for the Widnes Vikings in the Super League after they were recruited from their starring world cup performances.

PNGRFL chief executive officer Reatau Rau said that they would take responsibility and are obliged to make sure they can get matches televised to Papua New Guinea from the United Kingdom.
“We, at PNGRFL have an obligation now to make sure the country has access to watch the games played in England here in Papua New Guinea with some of our current Kumuls in England, we take it as our responsibility to connect our media especially the television companies here with the Super League in England.

“With Wellington and Stanton going to Widnes Vikings, we have our captain David Mead, Paul Aiton, Garry Lo and Kurt Baptiste as well in the super league.
“We have six current Kumuls before the World Cup. We only had Paul Aiton and now after the World Cup we have six.
“It’s a bit difficult for our Hunters team. But if the players can get Super League or NRL contracts that’s the end ultimatum,” Rau said.