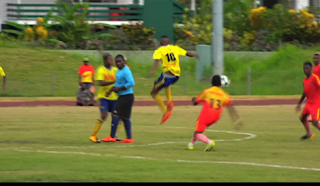 In Lae, Toti City FC and Besta PNG United FC were tied at 2-all into half-time, but Toti FC Came back stronger in the second half to win the game 3-2.

Despite the scorching heat in Lae City, a good number fo supporters turned out at the Sir Ignatius Kilage stadium in Lae for the NSL opener.

Both teams put on an entertaining performance with Toti City’s Obert Bika scoring the opening goal under the first minute of the game. Toti’s Goropol Albert scored the second through a long kick from the centre field.

Besta returned with a free kick in the goal mouth and later scored the equaliser just before halftime.

Toti City coach Peter Gunemba says his side is taking these games seriously as they prepare for the 2018 OFC Champions League.

"This game was the best because they (Besta FC) stretched us all to the full-time and we managed to score the winning goal' says Gunemba.

Gunemba also congratualated Besta FC who put up a strong performance against the champions.

"I really would like to congratualte the Besta boys for their fine effort against us. This will help us to assess ourselves to see where our strenghts and weaknesses are."

Besta Coach Harrison Kamake says his team played according to game plan and was impressed with his players who defended well for against a strong team.

At the Laiwaden oval, hosts Madang FC came from behind to defeat FC Morobe Wawens 2 goal to 1.

NSL will continue this weekend with FC Momase taking on Besta PNG United in Port Moresby, Toti City FC to host Buang FC in Lae and Madang FC to play Southern Strikers at the Laiwaden oval in Madang.