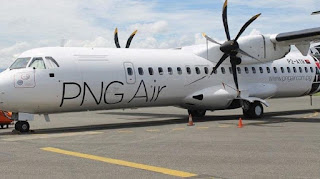 THERE is a possibility of PNG Air introducing a flight to Cairns in Australia, chief executive Muralee Siva says.
He was responding to shareholder Paul McLaren, of Pacific Nominees Limited, on whether the company had any plans to introduce a flight to places like Cairns.
He asked during the annual general meeting in Port Moresby yesterday: “With RPT (regular passenger travel), do we still have the ability to fly overseas, like for instance, to Cairns or Australia for that matter?”
Siva said: “Yes, absolutely. There have been talks among the management almost on an ongoing basis by the board as well. We have been very careful not to stress ourselves too much. We need to get our domestic right, that is our focus now.”
He said the international sector into Cairns “is going to be there for us”.
“We do not want to rush into it before we are ready,” he said.
“So for us as a business, the domestic focus is the short-term priority for us. The Cairns route will be there. We will definitely look at that some time down the line but at this point, it still is not there yet for us.” The National/Press Statement
SHARE THIS
Share it Tweet Share it Share it Pin it