PNG Women told to focus on qualities of a women leader 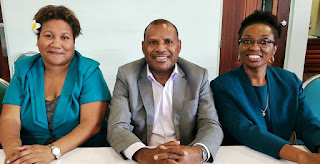 Too many NGO’s dealing with women leadership issues with no coordination, resulting in confusion; women competing against each other with no unity; lack of finance and human resource support; and lack of capacity building training, are just some of the main issues raised by Women Leaders during a two days Consultative Meeting on Women’s Participation and Leadership held last week on the 26th and 27th October, in Lae, Morobe Province.
The Meeting was jointly organised by the Department for Community Development and Religion with support from UN Women and Constitutional Law Reform Commission Secretary, Dr Eric Kwa who has been vocal on this Agenda for the past decade.
The objective of the meeting was on strengthening Women's Leadership role at the Sub-National and LLG Levels. Participants includes, Provincial Community Development Advisors, Women Representatives in the Provincial Assembly and selected women leaders from the provinces attended the meeting.
In her opening remarks, Secretary Ms Anna Solomon, told the women that there are serious questions that we women need to ask ourselves on the kind of approaches we take.
"When it comes to women in leadership, let’s stop talking women and gender. Let’s focus on speaking about women’s leadership qualities and what are those qualities."
"This Meeting is focused on hearing from existing women leaders at the sub national level. What are your achievements? What are your challenges? How can we help build your capacity so that your performance shows the country how women can perform as leaders? This will help contribute to the 2022 national strategy for women’s participation at elections," said Ms Solomon.
Meanwhile, Dr Kwa stressed the importance of women leaders not been able to win any seats in the 2017 National Election as a good thing.
“This is a good time for the women to seat down assess and evaluate where we went wrong so that we can take a different approach. We have been doing the same things over and over again without going anywhere."
"It is time we start doing things our own way instead of foreign influence. For years we have been using ideas from our development partners and we still end up nowhere. So the approach the government is taking, is by empowering women who are already there at the Sub-National and District decision making levels." Said Dr Kwa.
Dr Kwa also highlighted that women in leadership in Papua New Guinea have actually gone past the 30 percent mark proposed for women leaders’ representation at the National Level.
“We’ve been focusing on women in Leadership at the National level for far too long without realising that we’ve actually gone past the 30 percent mark with the number of representation of women leaders at the Sub-National, District and LLG levels.”
SHARE THIS
Share it Tweet Share it Share it Pin it