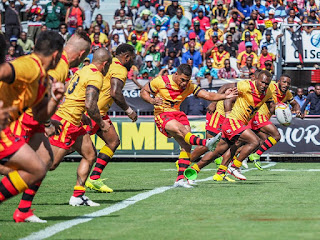 CRAFTY Canberra Raiders hooker Kurt Baptiste has been brought in by coach Michael Marum into the Kumuls starting line-up for their second Pool C match against Ireland on Sunday.
Stargroth Amean moves onto the bench, with Marum returning to two hookers in his 17-man squad to face the Wolfhounds.
Baptiste’s inclusion will see Hunters rake Wartovo Puara Jr, who started in the number nine jersey last week, shift back to the extended bench.
“We saw that  the NRL boys in our side are quality players and the main thing there is that they control the game very well,” Marum said.
“I thought Kurt combined well with our halves and everyone so hopefully he can create some more opportunities for us early in the game,” Marum said.
“Kurt is a smart player and I am sure that bringing him into the starting line-up will make a big difference when we start the game,” Marum said.
The 44-year-old said Amean’s presence on the bench was for cover for the outside backs..
“Last week we didn’t have a spot for an outside back on the bench because we had two hookers and that is why we decided to bring in Star.
“We have front rowers in Wellington Albert and Enoch Maki to cover for the forwards and that should do for us but if anything pops up later this week, we can always make changes,” Marum added.
Veteran forward Rod Griffin is not expected to recover from a knee injury from a training mishap last week and was not named on the extended bench.
“Unfortunately Rod will miss out on this weekend’s match again. He has been working really hard on his rehab and he will be going through a scan later this week and hopefully he’ll be good to go when we play USA,” Marum said.
In terms of goal kicking Marum said both Ase Boas and Rhyse Martin would share duties with Boas to be the principle kicker.
“Ase (Boas) was okay to carry out the goal kicking duties last week but he hadn’t been practicing a lot in the lead up to the Wales game because of his knee injury but Rhyse (Martin) did well enough on Saturday and both have been practicing so we’re okay in this area.”
Marum said they are expecting a very strong challenge from the Irish, who beat Italy convincingly last week.
“Ireland have played one game based out of Cairns and they’ve won. They’ve acclimatised down there with the conditions so they’ll be coming up here and I think they’ll be tougher than the Welsh,” Marum said.
“We will treat them with respect like we do with all of our opponents. Ireland is a different side, they’ve got lots of Super league players in their team. We’ve studied their game against Italy and we know that we’re taking on a very tough side.”
Kumuls: 1. David Mead (c) 2. Justin Olam 3. Kato Ottio 4. Nene Macdonald 5. Garry Lo 6. Ase Boas (vc) 7. Watson Boas 8. Stanton Albert 9. Kurt Baptiste 10. Luke Page 11. Rhys Martin 12. Wllie Minoga 13. Paul Aiton.
Reserves: 14. James Segeyaro 15. Wellington Albert 16. Stargroth Amean 17. Enoch Maki 18. Moses Meninga 19. Lachlan Lam 20. Nixon Put 21. Wartovo Puara Jr . The National / ONE PNG
SHARE THIS
Share it Tweet Share it Share it Pin it