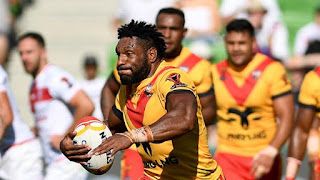 The Lions will head into next week’s clash in Auckland battle-ready after facing PNG’s fiery defence, but a slew of improvements will need to be made following a clumsy afternoon.


The victory will read a seven-tries-to-one on the scoresheet, but with 20 errors provoking a 56 percent competition rate it will be a huge assignment to progress past Tonga.

England’s superb finishers on the outside edges were the standouts, both Watkins and McGillvary bagging braces in classy performances.

Plenty of errors stifled what was a brutal and fast-paced opening 40 minutes, the heavy clashes headlined by David Mead’s collision with England half Luke Gale’s shoulder – forcing the PNG fullback from the field just 90 seconds into the match.

Two tries to Jermaine McGillvary on the right flank were the only early points as England took an 8-0 lead midway through the first half.

Neither side could build any consistent momentum on what was a hot 28-degree day in Melbourne, but it was England who had the swing of the ascendancy and the lead on the scoreboard.

The task for PNG became significantly harder when Mead – their captain – was deemed unfit to return following his head knock.

Things got heated when Kevin Brown and PNG stand-in fullback Stargroth Amean came together in a heavy collision, England players responding to the physical defence from the Kumuls.

In the 31st minute, Alex Walmsley barged his way over the try-line supplying England with another six points after Widdop’s conversion to extend the gap to 14-0.

While their errors were constantly putting them on the back foot, PNG’s desire couldn’t be faulted and that was emphasised by their ruthless defence.

When the sides returned from the break, the errors continued as the game became riddled with turnovers.

During some broken play in the 53rd minute, a deft grubber-kick from Gareth Widdop down a short-left edge bounced up perfectly for Ben Currie who ran under the posts to score.

Trailing 20-0, the Kumuls quickly hit back when Garry Lo scurried down the sideline to post PNG’s first points and reduce the deficit to 14-points with 20 minutes left to play.

Kallum Watkins finished a breaking run from McGillvary in the 69th minute, moving England out to a 20-point lead at 26-6.

PNG looked to have scored a sensational try through Willie Minoga just a few plays later, but an obstruction overturned the decision.

Again, playing to the right side, England placed a kick across field which finished with a diving second-try to Kallum Watkins.

Shortly after, Ryan Hall sealed it with a stellar try of his own in the 78th minute, scoring his 34th career try for England.