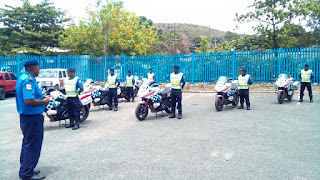 Director of Traffic Police Senior Inspector Joseph Joe said police are ready and prepared to provide professional security escorts during the Rugby League World Cup as well as other major events including the APEC summit in 2018.
Inspector Joe assured that with the training provided by the Australian Federal Police, traffic officers will provide motorcycle escorts during lead up meetings for the APEC meet and they are prepared for the world cup and any other big events for that matter.
He made this known during the 4th batch graduation of the motorcycle and motorcade escorts for APEC today where seven police traffic officers graduated with trained skills in motorcade escorts for VIP’s and delegates in preparations for the upcoming APEC summit next year.
He saidthey have so far graduated more than 30 officers and revealed that there is a need to train more traffic officers in providing motorcade escorts in preparations for the APEC in order to achieve the target of training more than 80 officers.
He also said that officers were trained for the motorcade escort as well as to become instructors in the future as well.
Inspector Joe said the training will ensure safety for the visiting delegates and he extended his gratitude to the Australian federal Police for the training and assistance to the PNG Police.
He urged the graduates to learn as much from the training conducted by AFP and other training to come.
SHARE THIS
Share it Tweet Share it Share it Pin it