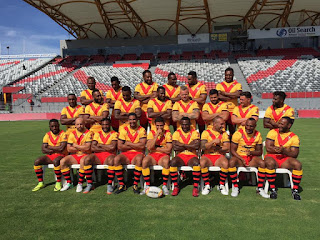 KUMULS  playmaker Ase Boas says he will be ready to face the Welsh on Saturday, allaying fears he could miss the World Cup opener with a knee injury.
The Papua New Guinea LNG Kumuls vice-captain told The National he was confident he would be running out onto the Oil Search National Football Stadium two weeks after being pulled out of the Tri-Nations fixture against Fiji in Suva.
The 28-year-old played down the severity of his injury, describing it as a bruise that needed to be rested.

“It was just a bruise on my left knee,” Boas said at training yesterday.
“Our physio Simon Morris has given me until tomorrow to confirm whether I am ready to play the first game or not. But for myself, I am ready,” Boas said.
“I’ve been taking care of it and Simon has been happy with the progress over the last week. It’s been really good and I know I’ll be good for the weekend.”
Boas’ importance to the side cannot be down played with the five-eighth the side’s chief play-maker and goal kicker.

Boas despite struggling on one leg in the Tri-Nations fixture had a hand in his side’s two tries and kicked a conversion with ease and combined well with hooker Kurt Baptiste.
Boas said he had no intention of letting down the fans or the country and would run out in the No.6 jersey for the 3pm fixture against the Welsh Dragons in front of a full house at the Oil Search National Football Stadium.
“I’ll give my best for the team and the fans and all those out there who support us and want us to win.”

Kumuls coach Micahel Marum said told The National that his star half was crucial in a leadership role as well as being the sides best goal kicker and general play kicker and would be key to the side’s success at the World Cup.
“It would be a blow if we lose him although we have enough players who can fill in at first receiver and organise the sets but we would miss his goal kicking,” Marum said.
Marum said his side were prepared for the worst case scenario but he did not anticipate that happening saying that Boas was almost certain to be cleared to play.
SHARE THIS
Share it Tweet Share it Share it Pin it