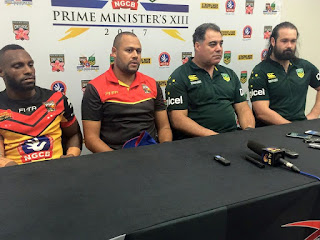 PNG’s Prime Ministers 13 Assistant Coach Steven Nightingale said their game on Saturday against the Australians PM’s 13 was a very tough one. He said most of the boys on his side were Digicel Cup players and they have given the Aussies a very good game. He added that they have completed their sets of play in the first 20 minutes but gave in to the Aussies on the last minute.

Meanwhile Australian PM’s 13 Coach Mal Meninga admitted that he was really encouraged by the effort the PNG side put into the game on Saturday.

He said PNG PM’s 13 got them by surprise in the first 20 minutes with their game, especially aggressive defense. He encouraged his team in the second half to fight hard after the strong performance by PNG side.
Coach Meninga said he was not surprise but encourage by the way the PNG boys played the game. He added that it has been a while both teams played against each other and both are not familiar with each other, but both teams put on a good performance. PNGFM
SHARE THIS
Share it Tweet Share it Share it Pin it