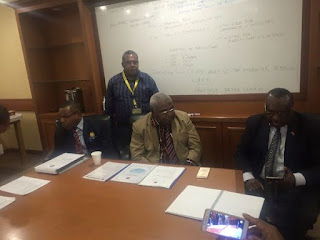 The Government will revive run-down plantations throughout the country by engaging communities around these plantations using the Cooperative Societies model.
Minister for Trade, Commerce & Industry, Mr Wera Mori announced today that some 300 plantations have been identified and that he will be pushing a submission through Cabinet to approve funding of US$250 million to fund the program across five years.
There are estimated, over 300 hundred rundown plantations in the country, at an average value of K5.0 million per plantation. The estimated total value of these dead assets equates to K1.5 billion (300 x 5=1.5 billion).
The total specific intervention cost is estimated at US$250 million (@ 0.33= K757, 800 million) over the medium term or five years. The intended period for the project is 2018-2022.
“On average it is anticipated that each plantation will form ten (10) co-operative societies, creating an expected thirty (30) employment opportunities generating an average income of one million kina (K1.0m) per plantation over a year.
The department has been tasked to prepare both policy initiatives and possible legislation if need be within two weeks. This includes identifying ways to ease stringent commercial bank borrowing guidelines which has been a hindrance to the development of Cooperatives and SMEs over the years.
Mr Mori gave examples of countries like China, New Zealand and Vietnam where he said,” the Cooperative concept has taken off in a big way and is contributing to that nation’s rapid economic development and whose socio-economic success can be credited to Cooperative Societies.
Among many challenges, he said, our government has to (i) create a broad base economy, and (ii) transform current economic growth into a much more inclusive and sustainable development for the entire population urging civil servants to work with private sector agents and to “think outside the box” to implement government policies.
In addressing the challenges outlined the Government moves towards achieving fellow Papua New Guineans dream of a wealthy, healthy, and educated society by 2050. In the medium term the Governments Small Medium Enterprise Policy and Master Plan 2016-2030 articulates the following objectives:
- Employment creation of two (2) million jobs by 2030; and
- Fair and equitable distribution of national wealth;
(a) Through ownership of seventy (70) percent of formal economy sector, and
(b) Have an income per capita of US$9,600 per annum (K50, 000 per annum).