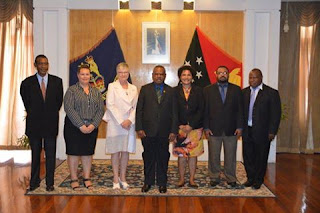 High Commissioner Mackwell informed the Governor General that the New Zealand government will be providing security training for Police personnel especially in the areas of close protection, communication and water policing among others in preparation for the APEC meeting next year.
High Commissioner Mackwell said, the New Zealand government will continue its rural electrification program in PNG and through its Trade Commission explore further opportunities to increase trade in PNG.

The Governor General thanked the New Zealand government for its continued support in promoting bilateral relations between PNG and New Zealand, climate change and maritime border security which he says is a major concern for PNG and Pacific island countries.
Grand Chief Sir Bob said, New Zealand has successfully integrated the cultural and traditional system of the Maori into its political and social structure a system of government that PNG and other Pacific island countries can learn from and emulate.