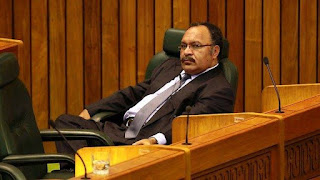 The aigani National Court has refused an application asking it to stop Ialibu-Pangia MP-elect Peter O’Neill from taking office.

Runner-up in the Ialibu-Pangia seat, Stanley Liria, filed an urgent application asking the court to restrain Mr O’Neill from taking a seat in Parliament today as the tenth Parliament meets to elect a Speaker and new Prime Minister.

The application was refused because a primary issue, which is polling on Sunday, was an issue that Mr Liria had raised with the highest court, the Supreme Court, and was yet to be determined.

The case was adjourned pending the outcome of the Supreme Court reference.

Mr Liria had gone to the Supreme Court on July 17, asking the court to decide if Sunday voting breached the Constitution. The application also asked for a combined interpretation of section 50 and section 55 linked to section 130 of the Organic Law of National and Local Level Government Elections.