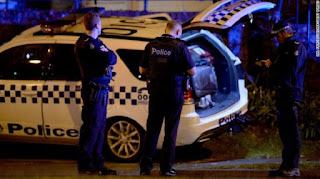 One man has been killed and three policemen shot after a standoff at an apartment building in suburban Melbourne.

Victoria Police Deputy Commissioner Andrew Crisp told reporters a woman had been held hostage in an apartment Monday and that terrorism was "one line of inquiry."

"At this stage we have not actually confirmed this line of inquiry. We do have counter terrorism involved ... we'll be here for quite some time," he said.

Police were called to the scene after emergency calls reported loud bangs or explosions, Crisp said, adding no detonations had been confirmed.

Once law enforcement arrived at the apartment block shortly after 4 p.m. local time, they found a man dead on the lobby floor with a gunshot wound.

A second man was holding a woman against her will in one of the apartments. Police earlier said they attempted to negotiate with him but Crisp said later he was not aware of any contact with the gunman.

Two hours later, the gunman unexpectedly left the apartment and began firing at police. Three male officers were shot before the assailant was gunned down. Their injuries aren't life-threatening, police said.

Brighton is a suburban area in eastern Melbourne, known for its affluent residents and close proximity to the beaches of Port Philip Bay.

Roads around the area were closed throughout the standoff and will remain closed for some time, police said. Source: CNN