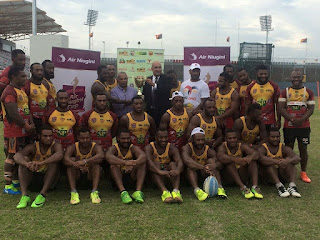 SP Hunters Coach Micheal Marum said Wellington Albert, David Loko, and Brandy Peter are under watch after injuries they sustained during last weekend’s home game.
Coach Marum says the trio will be monitored for three days before their departure to Brisbane on Saturday saying injuries were not that serious.

Coach Marum further stated that they cannot rush them into the team. He said some players are returning to training after injuries so they will be okay for replacement if the three are not cleared early before the game.
Coach Marum also stressed that more emphasis will be placed on their defence for this weekend’s game against the Norths Devils.
Coach Marum said their defence structure will be a key priority for their away game.
He said Devils will place in most of their NRL players on the weekend and they are preparing for it.
He said last weekend’s game, during the second half, they have experienced a lot of drop balls, and also their sets of plays were not being completed