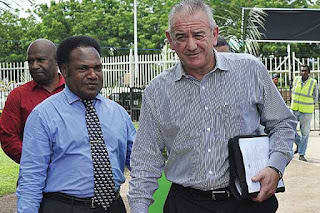 THE Gerehu Clinic will be a provincial hospital and health hub for the National Capital District, Health Minister Michael Malabag said yesterday at the launching of the Gerehu General Hospital.
He said that the decision was made by the Government to free up space at the Port Moresby General Hospital to become the country’s national referral and teaching hospital.
“It will fit well with the establishment of the new medical and health university at Taurama that was approved by the National Executive Council recently thus making Port Moresby General Hospital the university teaching hospital.”
Malabag said that the decision to declare Gerehu as the second hospital in the national capital was also because of the growing population.

“We need to build more hospitals and clinics in the city and the declaration of the Gerehu General Hospital is the beginning of many new improvements and changes to health services in the city.”
He also said the Department of Health was in the process of transferring health services to National Capital District Commission as the government of the city of Port Moresby.
Malabag also witnessed the swearing in of the new hospital board.

Board chairman Peter Del Monte said that they were honoured to be appointed as board Members of the Hospital.
“We will work together with the hospital stuff and support them in ensuring that money is spent wisely and health service delivery meets the expectations of the national health standards.”
The board of the new Gerehu General Hospital comprises Chairman Peter Del Monte, Deputy Chairman Sanjay Gosali, Paulus Levili, Dr Goa Tau, Stanley Lapan, Kupulu Garner Mera, Mato Posu, Kem Hesingu and Bishop Rev Vaburi Dabada. The National/ ONEPNG
SHARE THIS
Share it Tweet Share it Share it Pin it