Home Headlines Sports Vanuatu U-20 side prepare for World Cup

Vanuatu U-20 side prepare for World Cup 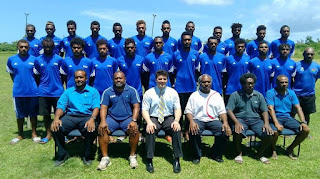 Vanuatu U-20 team led by Serbian coach Dejan Gluscevic is preparing to travel to New Zealand for three months of camping before heading off to the FIFA U-20 World Cup in Korea 2017.

The team is expected to leave Port Vila on March 4.

Vanuatu have never previously qualified for any FIFA tournament.

According to the FIFA website, Vanuatu boast a strong record at youth level in Oceania – sitting behind only New Zealand and Fiji on the all-time U-20 list among active OFC members – and they finally turned that into a tangible achievement in 2016.

Playing on home soil in the September 2016 OFC tournament, Vanuatu looked solid in defence and with a cutting-edge in attack. Vanuatu were the only side among the eight-nation field to win all three group matches, following wins over Fiji, up-and-comers Papua New Guinea and the always competitive New Caledonia. They then displayed their resilience to earn a memorable 2-1 comeback semi-final victory over Solomon Islands in front of a large expectant home crowd and win their way to Korea Republic 2017.

The team for the FIFA U-20 World Cup are as follows: