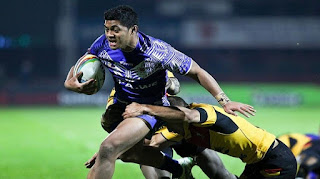 Toa Samoa is keen to welcome back Anthony Milford for the May test against England and hopefully the Rugby League World Cup at the end of the year.

The 22-year-old Broncos star represented Samoa at the last World Cup and told the Courier Mail he was available to face England in May.

International eligibility laws were relaxed last year, allowing eligible players to nominate both a tier one and tier two nation to represent, with no stand-down periods and the ability to switch multiple times.

Milford is free to play for Samoa if he's overlooked by Australia and could even play for both this year, as well as the Queensland State of Origin team.

Samoa coach Matt Parish said if he can pick the players he wants to, the Toa can compete with anyone in the world.

"Tony Milford, that's the one I'm looking forward to playing for Samoa," he said.

"I think he's going to be fantastic. The last time he played for Samoa was in the 2013 World Cup where he was an absolute stand-out.

"And to have someone like him, if he doesn't make the Australian team, being eligible for Samoa is a massive bonus."

Matt Parish said he had spoken to a number of players in recent months, who expressed an interest in playing for Samoa this year.

"Yeah I have, I've fielded plenty. To be honest I was only talking to [Broncos and Queensland forward] Josh McGuire on Wednesday about it," he said.

"He got overlooked for the Australian tour last year and that being the case he could quite easily play for Samoa.

"Someone like Josh, he could play for Samoa in May against England then play Origin for Queensland and then if he's not selected for Australia in the World Cup at the end of the year he can come back and play for Samoa, which is the way it should be.

"Everyone wants to see the best possible players playing for the right nations."

Samoa will face England in an expanded Pacific Test program in May, with the Cook Islands taking on Papua New Guinea and Fiji up against Tonga.

Matt Parish is looking forward to the new challenge and the chance to select a full-strength line-up.

"Last time we played England was in the Four Nations and we certainly completed very well," he said.

"That's the exciting part for us and I've got no doubt that Kristian Woolf for Tonga and Mick Potter for Fiji will be the same because these nations are the ones that are going to benefit the most."