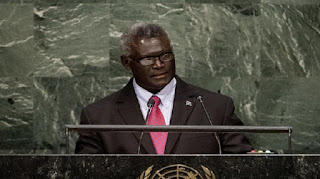 The role of an anti-corruption taskforce responsible for several high profile arrests in Solomon Islands has been questioned by the country's MPs in parliament.

Known as Taskforce Janus, the initiative is understood to be a joint effort between Police and the Ministry of Finance and Treasury.

Its last high profile investigation led to the arrest of the permanent secretary of the Ministry of Police Edmond Sikua.

Mr Sikua, a former assistant commissioner of the Royal Solomon Islands Police Force, faces seven counts of official corruption for allegedly awarding government tenders worth more than $US80,000 to Beeds Investment, a company registered and owned by his daughters.

Prime minister Manasseh Sogavare had to defend the initiative in parliament after several MPs raised concerns about its purpose and functions.

According to the Solomon Star newspaper, one MP the representative for East Honiara, Douglas Ete, went as far as saying that the role Janus played made it seem as though Solomon Islands was a dictatorship or some sort of communist country.

Mr Sogavare reassured MPs that the role of Taskforce Janus was simply to carry out investigations in collaboration with the Director of Public Prosecution.

But the MP for North East Guadalcanal, Dr Derek Sikua, called on the government to clearly define the work of Janus and to draw boundaries around its roles and how they are separated from mandated government authorities such as the leadership code commission and the office of the ombudsman.

However, in the meantime prime minister Sogavare said Taskforce Janus will continue to intervene and investigate public servants, if endorsed by the authorities within those offices.