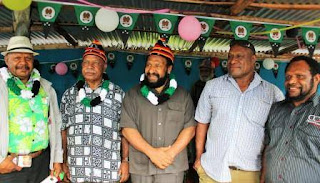 Polye was accompanied by Laigap-Porgera MP Nixon Mangape and Triumph Heritage Empowerment party officials.
The delegation was received overwhelmingly by sing-sing groups, community leaders and individuals who braved the heat of the sun and rain.

A community leader and former army commander Col. Joseph Kewa said Polye and Mangape were the first politicians to enter the village since independence.
Mr Kewa said despite their village was about 8 Kilometres away from the town, basic services like roads, water and electricity supplies were lacking.

President of Bull-mix community development association Jacob Moka commended the MPs for being humble and responded favourably to their invitation.
He said developments were only polarised in Port Moresby at the suffering of communities like his.
“It has compelled us to be recognised by the government. We have formed this association to tilt the land to sustain and improve our livelihood,” Moka said.
Launching the association, Mr Polye said he was surprised to see the services lacking in the area, close to the third largest town in PNG.

“Everyone should continue to stand up for what is true. You should stand up to pursue development of your community. When you supress the truth to seek services, who else is going to do it for you?” he said.

He said the missions and visions of the association were similar to his alternative government policies, outlining skilling the people, employment creation, agriculture and tourism are his top priority streams to bail the people out from the bondage of poverty.

Polye further said in order for the people to prosper, urban centres like Mt Hagen must look like one.
Better roads and other infrastructures, he said, are vital to enable conducive markets at their doorstep.
“The city must have freezing or storage facilities. We should buy a huge cargo aircraft at a cost of K70 million with K120 million for annual operation,” he said.
He demonstrated how K320 million for 500-meter flyover in Port Moresby should have been used.
“If we had bought this plane, K150 million would have been left. This piece of economically useless project has consumed too much. That is why I criticised the government,” he said.
Polye said over 40 tonnes of garden produces were airlifted from Kagamuga airport to Port Moresby at a cost of K6000 daily.

“When we are in government, we will buy materialise this to subsidize freight cost for our people,” he said.
Polye committed K10,000 to the association as its seed capital.
Captions:
1. Polye speaking at Keltiga;
SHARE THIS
Share it Tweet Share it Share it Pin it