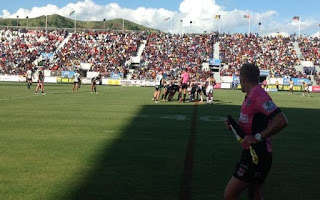 The Papua New Guinea Hunters rugby league team have made two changes to their squad for this weekend's Intrust Super Cup home opener against the Easts Tigers in Port Moresby.

Adex Wera replaces Karo Kauna Jnr in the centres from the team that beat the Central Queensland Capras 22-16 in their season opener in Rockhampton on Saturday.

Vice Captain Wellington Albert has recovered from a sternum injury and replaces Ishamael Balkawa on the bench.

Former Hunter Tim Lomai has been named on an extended bench for the Tigers.Coach Michael Marum was pleased with their first-up win but said they can't afford to take anything for granted.

"We needed to get off to a good start - we had to travel a long way to get the points - so really good start for us," he said.

"We spoke about the away records last season - we only won four games on the road - and that was part of our plan this year.

"With any game away, whether we win it by a small or big margin, as long as we get the points and for us to go away on the long trip as well and get the two points in Rockhampton was really good for the team."

The Hunters are back at at their National Football Stadium home this Sunday.They won all 11 regular season matches in PNG last season before a shock home defeat in the first round of the playoffs.

Michael Marum said they can't afford to be complacent.

"We can't think we can only win home games [or that] they're easy," he said.

"This weekend we have a tough opposition. The Easts Tigers had a draw with [Sunshine Coast] Falcons last weekend, 7-all draw, so they'll be tough to beat up here.

"They played here last year, they're not new to the ground. Everyone up here loves them as well because one of our own boys is playing with them...so I'm sure there will be a good number of people supporting them this Sunday."