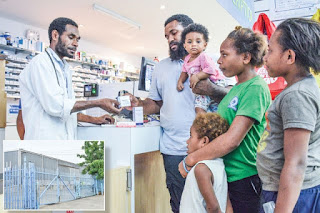 Delay in Health Department funding has resulted in a shortage of drugs throughout the country, says the Deputy Secretary Dr Paison Dakulala.
He confirmed that Government funding delay  and distribution of medicines were the two major reasons why hospitals were experiencing shortage of medicines.
“Procuring of medicines, which takes up to six months just to get the medicine into the country and another month from Port Moresby to other provinces in the country, are the main factors that contribute to the shortage of medicine in the country,” Dakulala told The National.
“So it’s basically funding, timing and mechanism that cause hospitals to run out of some medicines.”
Dakulala said the Health Department had an understanding with the Government and that it was because of the process involved that  funding was delayed.
Health executive officer for the Bialla Health Centre James Malagen said the centre was experiencing a shortage of common drugs since last October.
He said the centre was purchasing medicines from Lae using money collected from patients.
Madang’s Modilon Hospital and the Port Moresby General Hospital also confirmed that they had a shortage of medicine.
Sources from Port Moresby General Hospital said there was no stock at the Area Medical Store and that shortage of drugs or medicine was an ongoing issue for Government hospitals in the country since 2012.
“Many patients are been sent by hospitals with prescriptions to purchase medicines elsewhere and some public hospitals are charging patients,” a source said.
“In some cases, patient’s families are asked to go and purchase medicine from private hospital pharmacies and bring it back for the doctors to treat their family members.” The National
SHARE THIS
Share it Tweet Share it Share it Pin it