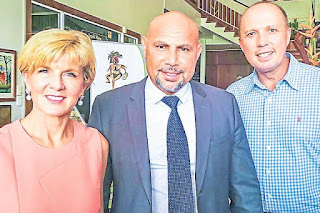 Australia and Papua New Guinea have signed an understanding to work together to address issues of mutual interest.
Australia’s Foreign Minister Julie Bishop and a team of five government ministers from Australia, PNG Foreign Affairs and Immigration Minster Rimbink Pato, Sports and Apec Minister Justin Tkatchenko, National Planning and Monitoring Minister Charles Abel attended the 25th  PNG-Australia Ministerial Forum in Madang where they signed up.
Pato said yesterday’s discussion was constructive and fruitful, and put together in a strong bond of friendship between the two countries.
He said the two countries would continue to work together.
Bishop said Australia would be a major partner in the preparations for next year’s Apec and would work closely with PNG to address and improve business,  investment and security issues in the country.
The PNG-Australia relations took on a more focused position on building an economic and strategic partnership to capture trade and investment links, security cooperation and strengthening people-to-people links.
Pato said while working in partnership to ensure that Australia’s support was aligned to PNG’s develop agenda, the Government resolved for that partnership to be progressed to budget support through an agreed timeframe proposed for 2020.
“The approach for budgetary support will be on specific nominated sectors to achieve maximum impact,” he said.
“Therefore, it is timely to propose the phasing out of the ministerial forums and instead focus on bilateral engagements through sectoral ministerial arrangements.”
Other issues discussed during yesterday’s meeting were border security management, the Manus detention centre, major road projects and 2018 Apec security arrangements. The National/ONE PNG
SHARE THIS
Share it Tweet Share it Share it Pin it