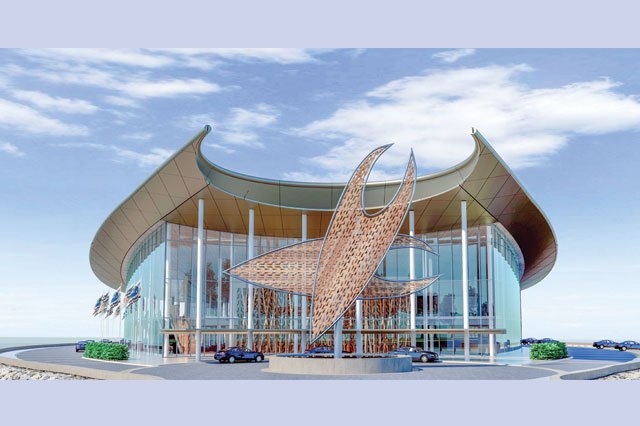 PRIME Minister Peter O’Neill yesterday viewed the interior of the proposed multi-million kina Apec Haus even before it is built – by using the latest in virtual reality computer technology.
He used a virtual reality (VR) headset at the Conrad Gargett architect’s office in Brisbane, Australia, yesterday which created a computer-generated building around the user – to feel like he is inside the actual building.
“You are able to walk into a computer-generated version of the building that is all around you,” he said
“It is quite life-like and you can see exactly how the rooms and halls will be established, and how much space there is in the building.
“Through this VR equipment, you can tell straight away if changes need to be made.
“This will deliver cost savings because we can make the required changes today, not later when construction is already underway.
“Security officials can also use the VR equipment to plan high-level protection measures that will ensure the safety of leaders and delegates.”
O’Neill said the Apec agenda covered major sectors such as transportation, agriculture and mining, “and will deliver real benefits for our people”.
The construction cost estimates for Apec Haus are being finalised, “which is being undertaken through a tax credit programme with Oil Search Limited”.
“We are building a very functional but unique conference centre that will be cost-effective and will generate revenue after Apec,” the prime minister said.
It is expected that after Apec, the building will also have a museum, retail space and cafes. The Naitonal