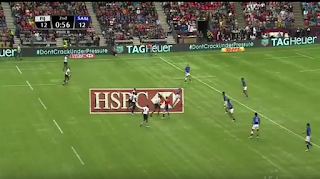 Fiji has survived a strong battle with Samoa beating them 19-12 in their second pool match of the 2017 Vancouver 7s.

In what was a very close encounter between the two sides, Fiji came out on top through great team play and defence.

Samoa was the first to put points on the board when their speedster Samoa Toloa scored with two minutes left in the first half to give Samoa a 5-nil lead.

But Fiji soon replied when great rush defense saw an intercept by Mesulame Kunavula who then passed it to Osea Kolinisau to cross over for Fiji’s first try in the match.

Fiji Village reports Fiji and Samoa were tied 5-all at half time.

Kalione Nasoko then gave Fiji a 12-5 lead at the start of the second half when he scored his third try of the tournament.

Samoa then made a great comeback through a try to Tila Mealoi to level scores at 12-all.

The winning try was then scored by Fiji’s Setareki Bituniyata with only seconds left on the clock.