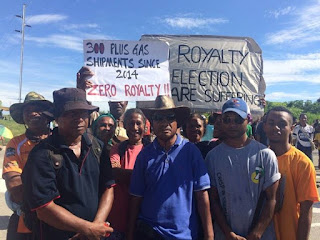 Frustrated land owners of 4 villages in the Central province blocked the entrance towards the LNG plant site today protesting for their long awaited payments of 3 years.

Mr Judah Matt Baru of the Porebada Besena Association said that they have been told by the state and Exxon Mobile that their payments will be given once the first shipment comes out.
However this did not eventuate. He called on the government and the Minister responsible Nixon Duban to address the 4 villages, Papa, Lealea, Porebada and Boera or they will close off the gates towards the plant site.

Meanwhile, another landowner representing the Papa village Mr Renagi Koairi also said that their accounts were officially launched in August 2016 clearing them to receive their payments however they have not received anything as yet.
Mr Koairi said, “The Prime Minister on Friday told us to give him 14 days to sort us out however we are not happy with this decision.”
“We now want the state to explain to us and give us answers why the hold up.”PNGFM
SHARE THIS
Share it Tweet Share it Share it Pin it