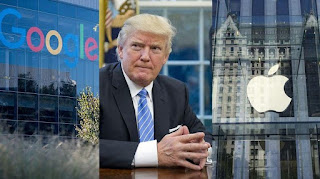 During President Trump’s first full week in office he has begun to dismantle America’s moral standing on the international stage. From his reconsideration of CIA ‘black sites’ to his insistence on vast voter fraud, to his inhumane ban on immigration from Muslim countries, Trump seems to be intent on normalizing discredited policies, adhering to blatant falsehoods, and waging an assault on human dignity.

To those who say ‘it can't happen here’ – generally the same ones who said Trump can never become president – to them I say: it is happening here. We must guard against attempts to undermine the rule of law and our commitment to welcoming immigrants; we must not allow facts to be rewritten to support the administration’s chosen narrative. The only way to avoid compromising our fundamental principles is not to say it cannot happen here, but rather to actively and zealously defend them.

Trump is an authoritarian who has already begun to ride roughshod over the freedom of the press - as we saw with the arrest of journalists who were covering the protests. Trump is successfully stoking the flames of a false populism based on discrimination, anti-immigration and a flamboyant disregard for truth and decency. The denial of anthropogenic climate change, for example, is part of Trump's overall contempt for opinions or conclusions that, however well substantiated, do not agree with his nostalgic and dangerous agenda for this country.

The banning of refugees is a cruel and inhumane policy: it is an attack on human dignity. It is un-American, it is also un-Christian and un-Jewish. The most basic moral tenet of both Christianity and Judaism is the injunction to love thy neighbor. Jesus' story of the Good Samaritan is especially timely now because when we understand the story in context we see that to love thy neighbor really means to love your enemy (the Samaritans and Jews hated each other). I am not suggesting that we should open our borders to professed enemies – I’m saying that we must either be a nation that protects and nourishes dignity, righteousness, and justice, or we must steadily sink into a new era of brutal policies – and on the other side of that lies a dark and perilous unknown.

Not only is the ban illegal, heavy handed, and grossly immoral, it is also self defeating and lacks any logic whatsoever: forbidding entry from countries that have not harmed an American here in forty years – including Iran, Iraq, Libya, Sudan, Somalia, Yemen, and Syria – while exempting countries, such as Saudi Arabia, which was the country of origin of most of the 9/11 terrorists. Nor should we overlook the fact that Trump has exempted countries where he happens to do business.

This ban is positively harmful to America, while at the same time revealing a depressing lack of psychological insight. It is characteristic of a narrow-minded and authoritarian personality. In the end, Trump's ban will likely make us more enemies than it succeeds in protecting us from. It is as if he is going out of his way to generate Muslim outrage at American bigotry and cowardice.

For the ban is, indeed, a profound act of cowardice.  It is certainly possible that a refugee may commit some violent crime in the US – we shouldn't suppose they're angels – but the question is do we want to allow that fear to override our basic commitment to do what is right not only ethically, but also in terms of our long-term interests as a nation.

Our institutions are still stable and they will continue to be so through the next four years – but that requires vigilance, resistance, and sometimes defiance. Fortunately, the majority of Americans are opposed to Trump's morally corrupt and craven immigration policy. Fortunately, mayors across the country are reaffirming their cities as sanctuaries, where all of its people will be protected from deportation.

Although Trump has already succeeded in creating a degree of havoc all around the globe, what we need to begin to prepare for is the moment this president is truly tested.  We cannot afford to let his administration play fast and loose with objective facts, to dismiss serious findings because they do not suit the president’s outsized ego. When Trump doubles down on a patent falsehood, he is actually debasing the most valuable currency we possess, namely truth. The president has already inflicted significant moral harm through his rejection of basic manners and decency, his devaluation of objective inquiry, his readiness to fan the flames of resentment, and his disregard of the plight of millions of refugees, for whose dire condition America is at least partially responsible.